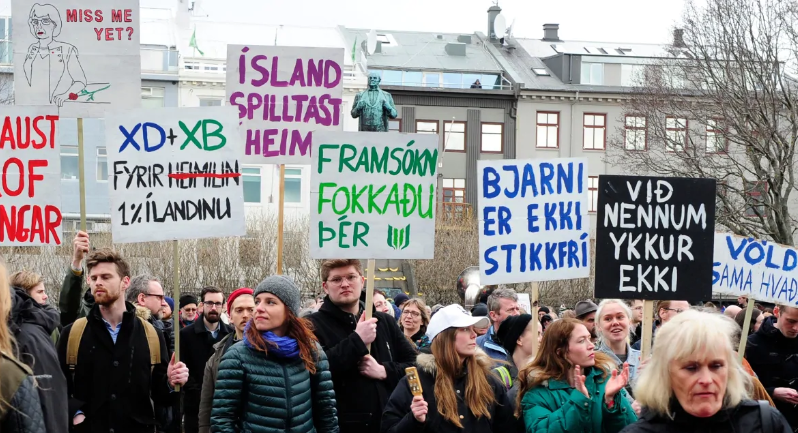 Above: An Icelandic protest following the Panama Papers.[i]

Iceland was previously considered a role model in terms of whistleblower protection.[ii] Following the financial crisis in 2008, the Iceland parliament unanimously adopted the Icelandic Modern Media Initiative “to protect and strengthen modern freedom of expression”.[iii] However over the past decade Iceland’s Corruption Perception Index ranking has steadily declined[iv] and Reporters Without Borders have lowered Iceland’s press freedom ranking. [v]

High profile scandals in the 2010s contributed to growing distrust in the Icelandic administrative system. The Panama Papers led to the resignation of Prime Minister Sigmundur David Gunnlaugsson in 2016, while the 2019 Fishrot File investigation led to a scandal over fishing quotas involving an Icelandic fishing conglomerate and Namibian and Angolan officials.[vi]

In 2018, a report commissioned by PM Katrín Jakobsdóttir recommended strengthening Iceland’s whistleblower protections,[vii] finding “distrust of the Icelandic public in the administrative system, which surveys show is considerably more than in other Nordic countries, can partly be attributed to the fact that such policies have not been adequately considered.”[viii]

In 2019, Iceland responded with a comprehensive whistleblower protection law: the Disclosure Protection Act. Under the Act, whistleblowers are protected against liability and penalty due to their disclosure of information. Employers cannot retaliate against whistleblowers by firing them or changing their rights at work, and strict confidentiality is provided to whistleblowers who report to regulators or law enforcement. [ix]

The Act protects both public and private sector workers. It consolidates whistleblower protections in one legislative instrument, and it gives a broad definition to contemptible conduct, thus protecting a wide range of disclosures.

However, the Act does not legislate a reward scheme (as recommended by the Icelandic Competition Authority)[x] nor an autonomous oversight body for disclosures (in line with Transparency International’s best practice principles).[xi] It requires a disclosure to be made in ‘good faith’, which Amnesty International says places an obligation on the informer and unnecessarily shifts attention to the informer’s motivations.[xii] It also restricts the application of the law to ‘employee’ which may not cover interns or former employees.

Since 2012, Australia has declined 8 points on the Corruption Perception Index.[xiii] An inquiry into Australian whistleblower legislation led to the Treasury Laws Amendment (Enhancing Whistleblower Protections) Act (‘The Australian Act’)’ in 2019.

The Australian Act broadened the definition of wrongdoing that can be reported, redefined eligible whistleblowers (to include ex-employees and their family), removed the ‘good faith requirement’ and extended protection to whistleblowers who report to prescribed bodies.[xiv]

The Australian Act does not cover public sector workers, who are instead protected under the Public Interest Disclosure Act 2013 (‘the PID Act’). An independent review conducted in mid-2016 concluded that the PID Act is not working to protect public sector whistleblowers. The review made 33 recommendations. The federal government agreed in principle to 30 of the 33 recommendations in late 2020 but has not yet enacted them.[xv]

Both Australia and Iceland have taken steps to strengthen protections for whistleblowers. Both countries could improve their respective legal regimes, possibly by including reward schemes and whistleblower protection authorities. 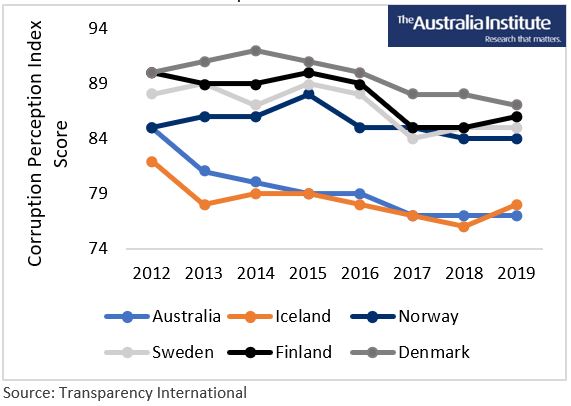 [i] CBC (2020) Iceland parliament rejects motion of no confidence in government, https://www.cbc.ca/news/world/iceland-no-confidence-motion-panama-papers-1.3528395

[xii] The Icelandic Department of Amnesty International (2020) Submission to Althingi on Protection of Informers, https://www.althingi.is/altext/erindi/150/150-1981.pdf

[xv] Wilson and Pender (2019) The whistle-shaped hole in our laws, https://www.canberratimes.com.au/story/5992031/the-whistle-shaped-hole-in-our-laws/#gsc.tab=0